How to direct Anger to achieve a larger goal

How to direct Anger to achieve a larger goal

People have been talking about “Anger” since decades. There has been a lot of talk around Anger Management, Various types of Frameworks, Workshops, Counselling, etc. which have been evolved to manage anger. Even scientists have researched in depth in understanding this emotion. In the true sense it is very important to understand to manage “Anger” as it has surprised us with wars, terrorism, riots, has divided people and has been the root of all sorts of violence that we can see or think of.

As correctly quoted by Mark Twain “Anger is an acid that can do more harm to the vessel in which it is stored than to anything on which it is poured.” This emotion has its roots much deeper within us and has prevailed from a long time. In our day to day lives we all are suffering from it and sometimes even make others suffer.

Now let us take a dive into how and why this emotion has overpowered us from generations, and we haven’t been able to still overcome it.

In my mind the foremost reason which triggers anger is the “fear of losing”. As a matter of fact, this has given birth to various other negative emotions such as insecurity, sadness, anxiety, distress etc. The list is never ending. So, the question arises: Fear of losing what?

And hence, the fear of losing any of these, creates a stressful situation in one’s mind and people get impatient and react angrily. All of these are temporary and outwardly things which are acquired by humans to get an identity in world.

If you reflect on your day to day life, you will find that the reason behind any bad situation and why it happened would fall under one of the above categories. Now, you can figure out which type of fear is overpowering your mind and makes you react in a certain manner in the situation.

On the contrary, anger can also be utilized for the good of the people. From our history, we see a lot of examples of people who used this “anger” to unite the people and fight against injustice. To name a few, Rani Lakshmi bai, Veer Bhagat Singh, Bal Gangadhara Tilak were some of the dynamic freedom fighters of India.

It was anger which got triggered due to suffering of people, slavery, suppression of masses, ruthless behaviour of the Britishers. This outraged the people and translated in the form of movements, wars, political & social reforms, etc. One thing common among all of these was the common goal of attaining freedom which made them take decisions in a certain way. These people directed their anger in the right direction which led to the freedom of India.

Now, coming back to the organizations, in the current setup, hierarchal structures are transforming into flat or more of organic structures with a larger emphasis on agile and scrum concept of teams. In such scenarios many a time, leaders find it difficult to maintain a seriousness within the teams due to the formation of culture of autonomy and lack of hierarchy. In other words, the power distance has become insignificant. Thus, here comes the role of anger which can be directed in a certain way to pass on serious messages such as asking people to follow a norm, maintaining quality standards, maintaining decorum in the teams, adhering to the compliance related regulations etc.

After retrospection, let’s move towards understanding how one can transform their life situations by knowing their inner score card.

A. The root cause analysis:

Step 1: The funnel approach: This approach helps you to take a deep dive into the hidden layers of your predominant emotion. For instance, think of a situation where you ended up hurting someone because of your anger. Now try and find out what was the emotional trigger behind it. Identify, what were the different kinds of emotions which lead to the outburst. They may be insecurity, sadness due to some other reason, ego, anxiety, fear of repercussions for the delay etc. You will end up finding 1 or 2 emotions which led to the situation.

Step 2: Map it up: This step will help you find the areas which generates fear followed by umpteen number of negative emotions. Map the area of identity power, money, physical image & position which leads to fear of losing it with the emotions you have identified in the above step. These 4 areas can be the reason of a person’s faliure in life if someone is too much identified by any one area.

B. Finding the right balance:

Step 3: Tie knot with purpose: As I have mentioned in the above example of freedom fighters, they were all bound by a collective purpose, hence they knew how to utilize their anger in different ways which lead to desired outcomes. Similarly, you need to carve out your purpose of life, be it at professional front or personal front keeping in mind that the 4 areas (power, money, image & position) in which human identity is formed, will help achieve success only if utilized with a right balance.

Step 4: Be the anemometer of your anger: Anger can also be cherished if at all it is driven in the right direction. With your purpose in place you can direct anger by transforming it into enthusiasm for getting things done, resolving issues, creating sense of urgency, learning new things which would help you achieve your purpose.

A well-defined path which can be called as mission with which one can also quantify how much use of power, money, image and position is required in their life. This will give immense clarity in your thoughts, mind and action. Clarity will bring in more patience and calmness within you as you would be prepared for the consequences. Thus, reactions will transform into responses bringing in peace. 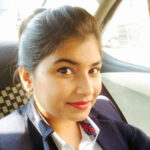 Stutee is a young professional who brings in a lot of enthusiasm and new ideas in order to design solutions. She has a great experience with multiple clients and aspires to flourish in the field of change management and Organization design.